We are the leader in renewable energy generation in Poland, with an approx. 10% market share (including biomass). Investing since 2007, we have built up a 529-MW wind portfolio. Our assets include the largest pumped-storage plants in Poland, which enhance system stability in moments of peak electricity demand, as well as a number of run-of-river generating plants. 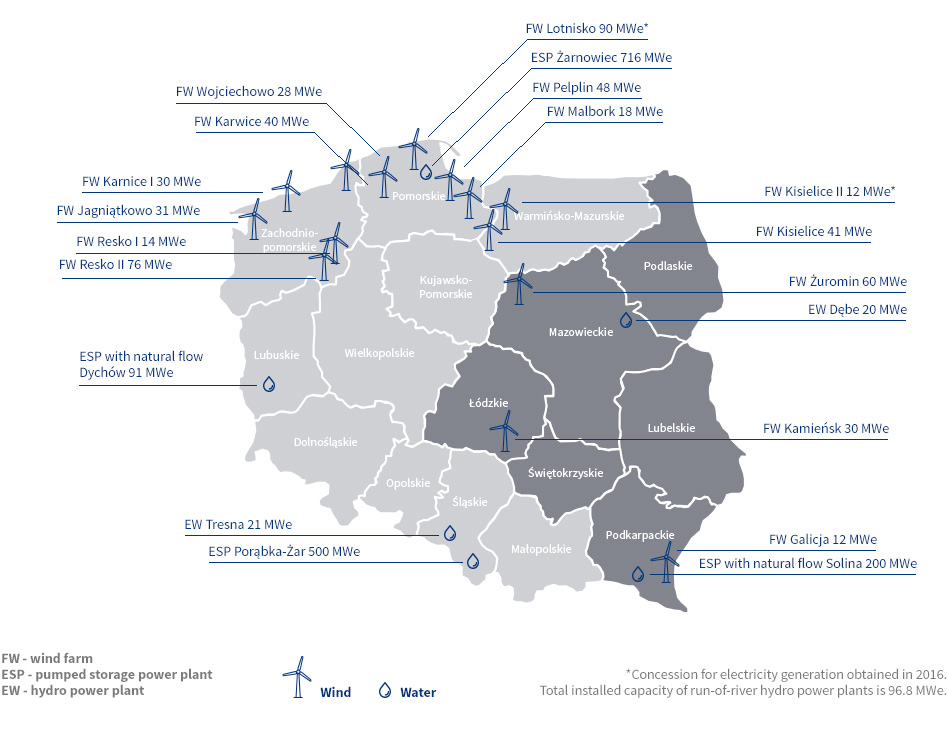 This segment's assets include:

Installed capacity and production in power plants of Renewables segment

Key figures in the renewables segment

Key EBITDA divergences in the renewables segment [in PLN million].

Major EBITDA drivers in the renewables segment in 2016, in comparison with the previous year, are as follows:

The renewables segment's negative EBIT result in 2016 was due to the recognition of impairment of tangible and intangible assets totalling PLN 865 million, including PLN 82 million in the fourth quarter. Impairment was caused by changes in market conditions (forecast prices of green certificates) and changes in the legal environment (increase in tax burden resulting from the act on investments in wind farms).

Capital expenditures in the renewables segment in 2016 and 2015.

The largest expenditure in 2016 was as follows:

Growth perspectives in the renewables segment

We are the leader in renewable energy production in Poland. The energy we produce would not have been created without natural resources. Taking this into account in our everyday business, we are committed to responsible exploitation of the resources from which we produce electricity. Of importance also are our investments intended to maintain river-beds, participation in costs incurred by river administrators and participation in costs of fishery restocking as compensation for making fish migration more difficult due to placing damming structures across waterways.

The following post-implementation monitoring tasks were conducted on existing facilities as part of wind farm operations in 2016: