We are the largest producer of electricity in Poland - accounting for approx. 36% of gross domestic output. The Group is the leader in lignite mining - our share of the domestic lignite mining market is 79%.

In the conventional energy segment, PGE Group operates through PGE GiEK S.A., based in Bełchatów. This company comprises 12 branches located within 9 voivodeships across the country. These include: 2 lignite mines, 4 conventional plants and 8 CHP plants. 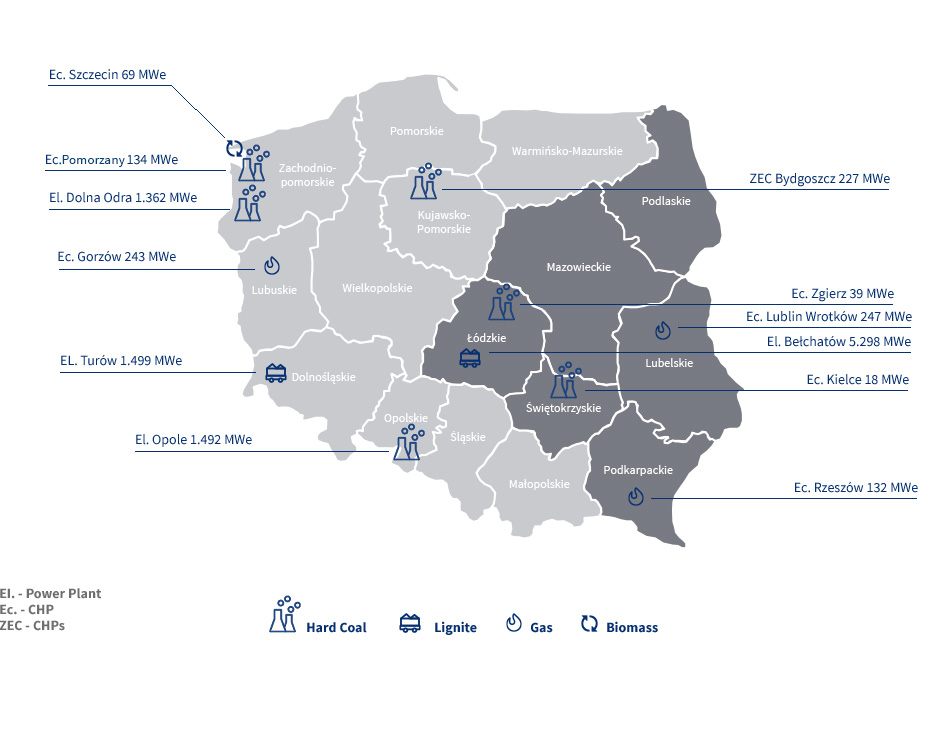 Our production is largely based on lignite, mined from our own mines, and on hard coal, gas and biomass procured from domestic suppliers.

Installed capacity and production in branches of Conventional Generation segment

PGE is currently conducting operating activities in two mining complexes: Bełchatów and Turów. Each of them includes an open-pit lignite mine and a plant that uses the lignite extracted from the adjacent mine. The complex in Bełchatów includes two deposits: Bełchatów field and Szczerców field.

In order to ensure continuity and secure PGE Group's value based on modern and effective lignite-based generation capacities, work is under-way to obtain a concession for lignite mining at the Złoczew and Gubin deposits.

In 2016, this project mainly involved a procedure to obtain a decision on environmental conditions for the investment and introduce changes in planning documents for municipalities located within the planned investment's area. According to the schedule, a lignite mining concession for the Złoczew deposit is expected to be obtained in October 2017.

In 2016, this project mainly involved a procedure to obtain a decision on environmental conditions for the investment and changes in planning documents for municipalities located within the planned investment's area. According to the schedule, a lignite mining concession for the Gubin 2 deposit is expected to be obtained in 2020.

In line with current regulations (act on protection of agricultural and forest land, geological and mining law), post-mining land is subject to reclamation. This is why mines conduct post-mining land reclamation once their mining activities are complete. (See more in chapter Reducing our footprint)

Negative EBIT in 2015 was affected by the impairment write-off on generating assets of the Conventional Generation segment. 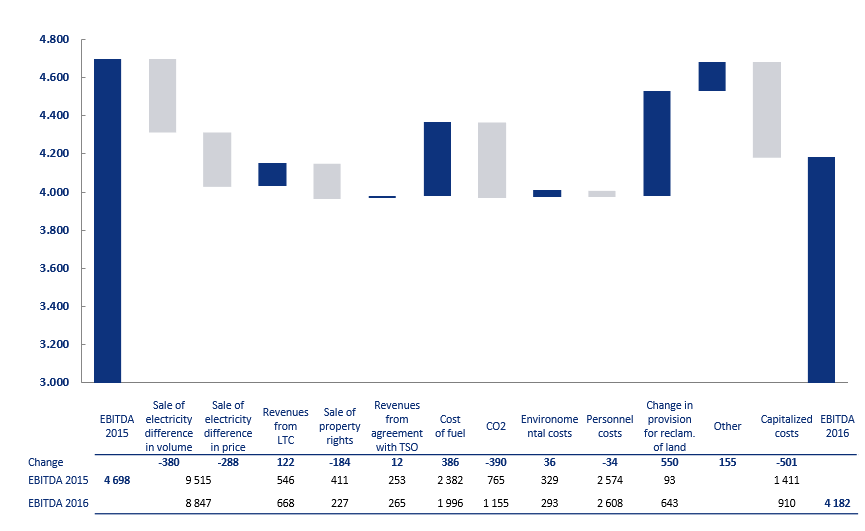 The major EBITDA drivers in the conventional energy segment in 2016, in comparison with the previous year, are as follows:

The largest expenditures in 2016 were as follows:

From January 1, 2016, PGE GiEK S.A. installations operate in line with emission standards set out in the IED Directive or use the derogation mechanisms provided therein. Derogation is intended to give existing installations additional time to technically adapt to the more rigorous emission requirements specified in the IED or exempt them from the requirement to observe these if modernising such a facility would be unjustified due to a limited expected life-cycle.

Management of waste and by-products

The generation of waste is an unavoidable consequence of producing electricity and heat in conventional plants using fossil fuels and biomass. Waste is mainly produced directly in combustion processes or in support processes.

The Company consistently improves and expands the scale of usage for combustion waste, conducts research and seeks new applications in line with sustainable development rules. These actions are aligned with EU policies directed at re-using waste, protecting natural resources and minimising adverse impact on the environment, including through limiting the quantities of waste deposited at storage sites.

Management of water and waste water

Conditions for managing waste and waste water are specified in relevant permits, including in particular integrated permits and water-law permits. Monitoring is conducted at PGE GiEK S.A. branches on an on-going basis as regards the quantity and quality of water collected and waste discharged.

Permissible noise emission levels for each installation are specified in relevant permits, mainly integrated permits. Noise emission measurements are performed every two years or ad hoc upon request or complaint by external entities.