We are present in a number of the energy market’s segments. The main division is into the wholesale market and retail market.

In Poland, the wholesale market is operated by the TGE exchange. The wholesale market has two segments - spot market, i.e. Day-Ahead Market, and futures market, where contracts for energy supplies with longer deadlines are executed: week, month, quarter, year. Contracts for energy supply for the entire next year (1-year forward) are a popular instrument. The futures market allows to lock-in future sales prices - the price is set when the contract is executed - this is of significance for risk management.

The wholesale market, both spot and futures, features products such as:

The wholesale market is open - transaction prices and volumes are publicly available on TGE's website, therefore TGE's quotes are a benchmark in business analysis and they synthetically and representatively present the energy market in Poland.

Trading volume on the day-ahead market for BASE products in 2016 was 27.5 TWh.

What drives energy prices in Poland?

Quoted prices of these instruments fluctuate freely every day and every month, depending on the supply/demand equilibrium. The most important factors that affect energy prices are as follows:

The futures market concerns the future. Average prices of annual contracts for 2016 are determined by historic transactions executed in previous years. Capital market analysts closely watch the price contracted for next year (forward Y+1). Average prices in Y+1 contracts executed in 2016 (regarding the delivery in 2017) were as follows:

The power market in Poland is divided between four key players, which are countrywide vertically integrated utility groups including PGE Group, Tauron Group, Enea Group and Energa Group. Aside from four mentioned groups, among important participants of generation segment are also ZE PAK and Poland-based subsidiaries of french grups EDF and Engie, i.e. EDF Polska and ENGIE Energia Polska. Those entities, while being important players in generation field are less active in other areas (e.g. distribution). In 2016 PGE Group generated 54 TWh of electricity representing 36% of country’s output – this makes us the market leader. 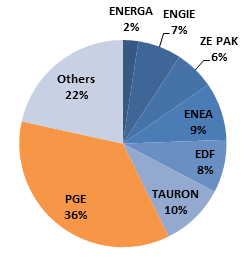 Source: proprietary work based on information published by companies and Agencja Rynku Energii (ARE).

In 2016, PGE Group sold 42.9 TWh to end customers, which translates into a 33% share of the retail market. Most of the volume went to business customers - 33.8 TWh, while households took 9.1 TWh. Energy prices in contracts with business customers are set bilaterally on a competitive market. Price levels depend on the customer's characteristics and needs. Energy prices in Tariff G are regulated - they are announced by the President of the Energy Regulatory Office.

In the retail sales segment the majority of sales is shared by four largest groups – PGE, Tauron,  Energa, Enea and by innogy Polska. In the geografic areas where those groups are distributors, they act as a default sellers for those customers that has not decided to change the electricity supplier.  This means that teritorial activity is partially influenced by historic genesis – before the liberalization of power market sales and distribution were realized by the same entities.

Polish utilities – share in sales to final recipients in 2016 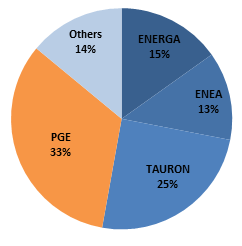 In the distribution segment the country is geografically divided between five large Distribution System Operators (DSO), that were obliged to separate distribution activities from other business activities. Aside from mentioned four integrated utility groups there is another important player: innogy Stoen Operator, responsible for distribution in Warsaw area. 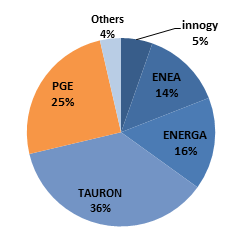 Heat market in Poland is highly dispersed, has local character and exhibits features of the natural monopoly. Dominant producers concentrate their activities in large urban areas, hence the competition is limited. Heat prices are subject to approval of the President of the Energy Regulatory Office. Five largest producers accounts for less than 40% of country’s output. PGE Group is one of the leaders of the heating market. Providing successful closing of EDF transaction, PGE Group will become the largest heat producer (measured by installed capacity). Important players at the heat market are also PGNiG Termika and Veolia Group.

Profiles of polish utilities (size of the chart reflects 2016 EBITDA and the contribution of respective segments). 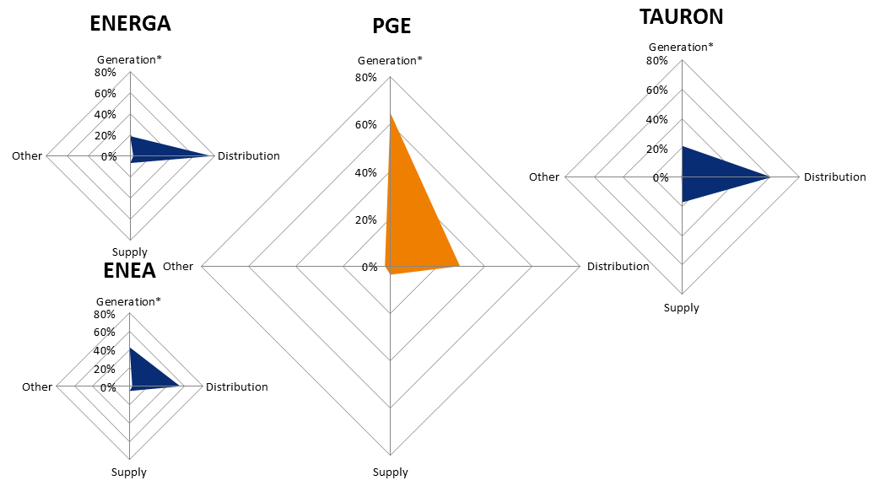 *Generation – conventional and renewable generation, coal extraction and heating.
Source: proprietary works based on date published by the above companies.

The property rights market is also called the market for colour-coded certificates or market for certificates of origin. "Black" or "uncoloured" energy is traded on the wholesale market, as discussed in the previous paragraph. Its price does not include support systems.

Support systems are a driving force behind changes in the technological mix in whatever direction the regulator wants. The obligation to redeem colour-coded certificates creates a market demand for these property rights. Electricity is assigned a certificate that identifies its origin (where, when and how it was produced) - this is issued by the Energy Regulatory Office, and this certificate is an exchange-traded commodity. The colour of the certificates indicates the source from which the energy comes.

PGE is self-sustainable in as far as lignite is concerned (in 2016, lignite accounted for 70% of Group’s production volume). We also produce energy from other fuels, which we purchase from external suppliers.

Our lignite mines (KWB Bełchatów, KWB Turów) are located in the direct vicinity of our power plants, which makes for cost effective transport using conveyor belts.
From an accounting perspective, settlements between the power plant and the mine are recognised as consolidation exclusions - this means that in PGE Group's financial statements the costs of lignite are recognised as costs of remuneration, depreciation and other cost items. 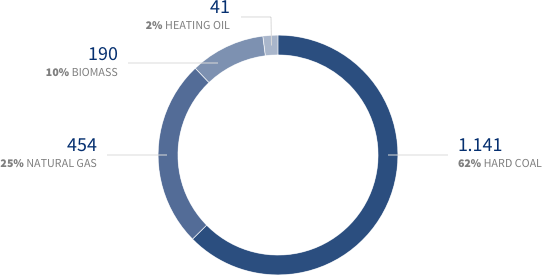 In 2016, our hard coal-based production reached 11.3 TWh of energy - this fuel accounted for approx. 1/5 of total production. Last year, we purchased 5 340 tonnes of hard coal for a total of PLN 1.141 billion. Our key supplier is the Polish Mining Group, in which we are a minority shareholder. Coal supplies are based on long-term contracts in which the price of this commodity is indexed according to a specified formula. PGE Group's demand for hard coal will increase once the mega investment at Opole II is completed. Stability of the hard coal sector in Poland is of strategic importance to PGE Group - this was one of the reasons for becoming a minority shareholder of the Polish Mining Group. A commonly applied measure of the situation on the domestic hard coal market is the Polish Energy Hard Coal Market Index1 (PSCMI1), published by the Industrial Development Agency.

It is worth noting that coal is not a uniform commodity - assortments differ by sulphation and calorific values. Fuel must be adapted to the generating unit: CHP plants require coal that is relatively more expensive, of higher quality, whereas regular power plants can use cheaper coal of lower quality. The coal market is characterised by moderate seasonality related to the heating season - the quality structure of contracted assortment changes in the course of the year.

This fuel is becoming increasingly important (in December a new gas-and-steam unit was commissioned at EC Gorzów). Successful conclusion of the transaction with EDF Group will mean additional demand for gas for CHP plants in Toruń and Zielona Góra. Gas-fired units have the advantage of flexibility (short reaction time) - this feature is becoming more important given the growing supply of energy from uncontrollable sources (renewable).

PGE Group owns biomass-fired generating units at EC Szczecin and EC Kielce, and in addition biomass may be co-fired in conventional units - together with lignite or hard coal.
The volume of energy produced from biomass is classified as energy from renewable sources - due to this, property rights are awarded (green certificates), which constitutes an additional source of revenue for producers, but the falling prices of property rights and the reduction of support for biomass co-firing impacted the economics of production.  In 2016, PGE Group purchased 868 tonnes of biomass for PLN 190 million.

The prices of CO2 allowances have a direct impact on the unit price of energy, just as the cost of fuel does. EUAs (European Emission Allowances), i.e. allowances for the emission of one tonne of CO2, are traded on the market. These instruments are traded on the international platform European Energy Exchange (EEX). Trade in EUAs is an element of the EU ETS system, which is the main tool for achieving the EU's climate policy goals. The system covers the energy, industry and airspace sectors. Each year, companies are obligated to redeem allowances corresponding to the quantity (in tonnes) of their CO2 emissions. Companies receive free-of-charge allowances, which can be traded on the secondary market. Companies that emit less than their allocated allowances can re-sell their allowances to companies that emit more than their limits. The allocation of free-of-charge allowances is being gradually reduced, which creates an economic impulse to reduce emissions. High-emission technologies are becoming expensive to operate and their owners are motivated to invest in low-emission technologies.

PGE Group is present on this market mostly on the demand side, making purchases to cover demand resulting from own emissions. In 2016, PGE Group's installations emitted 56 million tonnes of CO2. PGE Group was allocated free-of-charge allowances for 26 million tonnes, which covered less than half of the demand. The 30 million tonne deficit was made up by buying from the market. The cost of emission allowances reached PLN 1.154 billion.

CO2 allowance prices are driven by:

PGE Group is one of the five largest employers in Poland, present in over 200 locations. The headcount at the end of 2016 was 38 471. In 2016, employee costs reached PLN 4.237 billion (including PLN 3.154 billion in wages). The following local labour markets are of key importance: Bełchatów, Bogatynia, Opole, Rzeszów, Szczecin, Warszawa, Lublin, Łódź, Skarżysko Kamienna, Zamość, Bydgoszcz, Białystok, Gorzów Wielkopolski and other.

Adapting the employment structure to the company's needs is a challenge. Managing human capital is a continuous process, with key challenges including demographic processes, technological changes and the need to supplement qualified personnel, including through training programmes dedicated to graduates, management skill development programmes and voluntary leave programmes (in areas affected by automation).